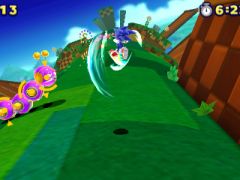 In case you haven’t read VideoGamer.com’s take on the Wii U Version yet, know that Sonic fares a little better on the 3DS version of Lost World. There’s a sense that the team who made it had a slightly better clue about how to design the levels around him, although it’s still not fantastic, frankly.

The game features completely different levels from the Wii U version, and they too mix up 2D with 3D. There are less annoying insta-death moments (only less, mind, they’re still about) and the controls are better, which is odd, given how occasionally unwieldy the 3DS nub can be. For example, parkour is integrated with more success.

However, some of the issues that blighted the Wii U version crop up here too. Sonic, while generally controlling with more grace, will again sometimes ignore what you actually want him to do due to another dodgy homing system, leaving you to blurt out profanities like an old Sailor.

The best platform games should feel like a joy to play, a boundless jaunt through stylised cartoony lands filled with character.

Sonic: Lost World doesn’t feel like that. As in the Wii U offering, levels drag on endlessly and a few of them aren’t fun to go through in the slightest. The 2D variations are easily the worst culprits oddly enough. It’s also blighted by an overuse of gimmicks, such as moments that see Sonic on a snowboard. It’ll have you grinding your teeth it’s that abysmal, and just feels cheap when it shunts you off a ledge or forces you to miss a platform.

Again, it’s a shame, because there’s good here, but it’s often buried beneath a quagmire of frustration.

So, yes, this is a better game than its more powerful counterpart, but Lost World on the 3DS, despite a few excellent asides, remains a largely average, occasionally frustrating outing for Sonic. Again.

Sonic: Lost World on 3DS is better than its Wii U counterpart, but it's still a disappointment.
6 Better than the Wii U version. Another average Sonic. Dreadful gimmick levels. Insta-death.