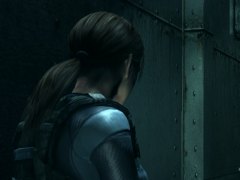 Resident Evil: Revelations originally came out on the 3DS last year and was far better than its bigger budget brother, Resident Evil 6. Perhaps because of the limitations of being on a handheld, it was a more stripped-back affair than recent ‘main’ titles, but in hindsight ended up being a much more focused and enjoyable experience than its bloated brethren. Despite this, it is still somewhat of a surprise that Capcom have opted to re-issue it on home consoles a year later.

We once again join Jill Valentine and a bunch of other people less important to the Resi canon. She’s on a giant abandoned boat called the Queen Zenobia due to some bad dudes who want to poison the world’s water supply. Or something. The enemy is called the ‘Ooze’, which is literally a bunch of anthropomorphic slime. Boulder-punching series staple Chris Redfield is missing, too, so you’re also looking for him. It’s ridiculous even by the series’ already pretty daft standards.

The game is broken up into bite-sized ‘episodes’ of action, jumping around between Jill (on the Zenobia) and the other characters, who flesh out the tale: a story which, it must be said, has been shoehorned into the events between the fourth and fifth iterations with all the subtlety and grace of Andre the Giant, if he was made entirely of hammers and air raid sirens.

It straddles the gameplay types of both generations of the great franchise and, for the most part, takes the best of these two distinct types of Resident Evil. Most of Revelations is set aboard the aforementioned ship. It evokes memories of the classic settings. Combat-wise, though, it very much looks to the more modern releases.

It’s a decent port, too. The 3DS original is still one of the best looking games on that console, and while this obviously isn’t the case here, the HD lick of paint is still pretty easy on the eyes. There’s a few new bits and pieces as well: enemies, weapons, unlockable costumes and the like to sweeten the pot for those who’ve already played the portable version. You can now even track your statistics and progress through the ResidentEvil.net website.

The interesting ‘Raid’ mode also returns, a sort of action-RPG sub-game mode where you play through levels from the single-player campaign and gain BP points to spend on weapons and upgrades, increasing your level and allowing you to take on much more difficult stages. It’s also playable in co-op online, and is a lot easier to actually get a game going now it’s on something other than the 3DS.

Unfortunately, it still has all of the issues that prevented the original from being a truly great Resident Evil game. First of all, the enemies don’t react to being shot quite how you’d like them to and just plod their way toward you. There’s none of the awesome stuff you had in Resident Evil 4, like popping them in the knee and then following up with a suplex, or shooting their hands to cause them to drop their weapons.

Also, the sections that aren’t set on the Zenobia are pretty inconsistent in content and quality, which is a real shame, as the parts on board are among the most fun I’ve had with Resident Evil since the almighty fourth instalment.

What is worth noting, mind, is how Revelations fares when played on a console without a second screen. I found the 3DS use of the said screen, which highlights the map and allows quick access to weapons, incredibly useful. Playing the Xbox version means, obviously, this isn’t available, instead relying on cycling through menus with the d-pad, or by accessing a menu. The Wii U version has it all on its lovely Gamepad, so it’s probably a slightly better overall choice. It also comes with some free exclusive DLC for the Raid mode.

Resident Evil Revelations HD is a great port of a good game that has a few problems, the result being something well worth picking up if you’re looking for some decent home console Resi action. Although this re-release is somewhat surprising, it is far from unpleasant.

Revelations on consoles is a great port of a good game that is well worth picking up.
7 Classic Resident Evil gameplay Looks great for a 3DS port Off-boat sections are poor The Ooze makes for crap enemies