Lara Croft and the Guardian of Light Review 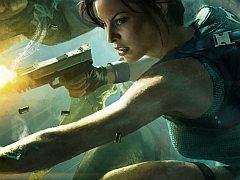 It’s quite remarkable that Crystal Dynamics has been able to create a game that feels designed for solo play just as much as it does for co-op. On my first run through the studio’s download-only Lara Croft and the Guardian of Light, the mixture of combat, puzzles and platforming seemed built around playing alone – yet as soon as I played through the same levels with a friend, it was hard to imagine how the game had worked as a single-player experience. This is just one of the reasons why Guardian of Light is one of the most expertly-crafted downloadable titles released this year.

Played from a fairly old-school distant third-person viewpoint, Guardian of Light looks completely different to every Tomb Raider game that’s gone before it. The 14 chapters here are large, sprawling environments with many areas to explore, all viewed from an isometric perspective. They look great too, as do the many enemies you’ll come across over the course of the decently sized adventure. It’s undoubtedly one of the most visually impressive downloadable titles on the market.

Controls aren’t your usual Tomb Raider fare either, with the left stick handling movement and the right aiming, similar to how retro shooters like Geometry Wars work. Holding the right shoulder button will cause Lara to fire or throw her weapon, and the left stick will then make her strafe. Movement speed here is adequate to dodge enemy fire (a roll move helps out too), but Lara doesn’t move around at a stupidly fast pace.

Weapons come in all shapes and sizes, but it’s only the default pistol and spears that are unlimited. The other tools in your arsenal, which includes machine guns and a flamethrower, rely on an ammunition meter, replenished by picking up items scattered around the environment and dropped by defeated enemies. Lara can also plant bombs and detonate them from a safe distance; these are unlimited, and ideal for taking out large groups of small enemies like, but there’s a small recharge period to stop you abusing their explosive power.

When playing alone the puzzles are cleverly designed, often making use of Lara’s grappling hook and her ability to stand on spears that’s she’s hurled into walls, but it’s when you play with a friend that things really get interesting. A second player steps into the shoes of Totec, an ancient Amazonian warrior who is woken by an army of men trying to get their hands on (shock, horror!) cursed treasure. Rather than simply being a re-skinned Lara, Totec has his own set of skills that help to make Guardian of Light one of the best co-op experiences around.

Rather than simply running through the same levels together, fighting more enemies and sharing spoils, the puzzles thrown at you in co-op require smart use of the two characters’ abilities. In co-op it’s Totec who can throw spears into walls, which Lara can then walk on (the massive warrior is too heavy for this), while the buxom adventurer’s grappling hook can be used to create tightrope walks for her partner. Totec can also use a shield to protect himself and his female companion, and this cleverly doubles as a makeshift platform that Lara can use to access out of reach ledges. The duo can also help each other cross large gaps and scale walls.

Levels that seemed to be built around solo play are different when you tackle them with a friend. Puzzles are completely changed so that they require tight co-ordination and co-operation with your buddy. In the past Tomb Raider has never seemed ideally set up for a co-op experience, but the new mechanics in Guardian of Light, combined with clever level and puzzle design, make for a game that is essentially two-in-one – so different is the feel when played alongside someone else.

Whether you’re playing alone or co-operatively, you’ll come across challenge rooms. These optional areas, marked by fiery red skulls above the entrance, pose trials that must be completed in order to gain new weapons or artefacts. Weapons are fairly self explanatory, but artefacts can be used to modify your stats. An early find will increase Lara’s speed, for example, but also makes her bombs less deadly. There are also relics you can find and equip, granting additional weapon powers (scattershot, regenerating ammo) that activate once you’ve filled a an on-screen meter by shooting several successive enemies; in this powered-up mode Lara also gains a score bonus for each foe she kills – a perk that helps when aiming to beat the targets set for each stage. High-scoring runs unlock new weapons to play with, and there’s also leaderboard fame to compete for. The game also lets you compare scores with friends who have the game, and if you’re competitive you may find yourself revisiting old stages in a bid to out-perform your mates.

Lara Croft and the Guardian of Light is slight in terms of storytelling – the one area seemingly skimped on to keep costs down – but everything else here is worthy of a full retail release. Visually it’s excellent, the campaign is just as long as recent full-price titles I’ve played and is different when played co-operatively, and the gameplay equally tests your brain and your trigger finger. Even when you’ve finished the story, competitive score-based play should keep you coming back time and again. The promised online co-op isn’t yet available, but don’t let that stop you picking up Guardian of Light. It’s a fine example of how to take a popular franchise and make it work for the budget downloadable market.

A few control issues bringing the overall quality of the product down, but that doesn't mean Guardian of Light isn't worth a look.
7 Fantastic co-op Refreshing take on tomb raiding Poor platforming sections The odd graphical upset

Lara Croft and the Guardian of Light

Lara Croft and the Guardian of Light