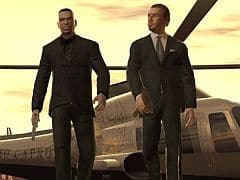 by VideoGamer.com Staff in Oct 2, 2009
No Comments

Who is Luis Lopez?

After years of small-time hustles, Luis caught a lucky break when he started working for club owner Tony Prince, eventually becoming manager of his two clubs, Hercules and Maisonette 9.

Who are Armando and Henrique?

Armando and Henrique are two of Luis Lopez’s oldest friends. They grew up together, went to school together, and got in a lot of trouble together. Henrique isn’t too bright, but he’s big, tough, dependable and knows how to use a gun. Armando’s a little guy who talks a big game, and considers himself the brains of the operation. not difficult given his partner in crime. Armando, in particular, resents Luis for getting out of the neighborhood and above his station, but Henrique and Armando remain fiercely loyal to Luis and always have his back.

How do these two guys have impact on the game?

Much like Terry and Clay from The Lost and Damned, Luis can call on his friends whenever he needs weapons and vehicles, or back-up on certain missions. Armand and Henrique are always around to engage in other activities, whether it’s visiting the clubs, hitting some bars or heading to the driving range for some golf.

Players will struggle with the competing loyalties of family and friends, and…

Players will struggle with the competing loyalties of family and friends, and…