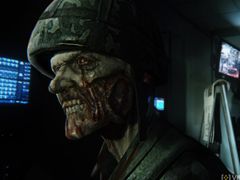 ZombiU set in London because city has a history of horrific things, says Ubisoft

Wii U launch game ZombiU is set in London because of the city’s history of horrific things, Guillaume Brunier, producer for ZombiU at Montpellier Studio, has revealed during a recent Iwata Asks.

Asked by Nintendo president Satoru Iwata why a French developed title is set in London, Brunier explained there are several reasons.

“With the Olympics being in London and the Queen’s diamond jubilee celebrations this year, London was in the centre of the world’s attention and a city that everyone felt a connection with. That was one of the reasons for setting the game in London.

“But a more fundamental reason was that London is a city with a history of horrific things, like Jack the Ripper. We figured it was a suitable setting for the dark world of this game.”

Iwata added: “Come to think of it, London has that kind of atmosphere too…”

Brunier continued: “London has both modern and medieval settings, and it’s a place that a lot of people want to visit. It’s also near France, meaning we could actually go there too!”

ZombiU will be released on Friday alongside the new Wii U.