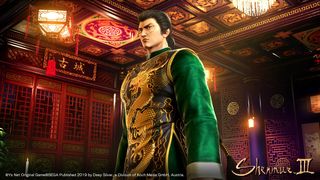 Ys Net has posted an official update to their Kickstarter backers as to the situation for PC keys for upcoming long awaited RPG sequel, Shenmue 3 for the game's launch as well as clarifying their decision.

As per the update on the game's Kickstarter page, backers are being told that their physical and digital PC keys will go through the Epic Games Store, thanks to the previously confirmed exclusivity deal with the store announced back at E3.  In fact, the physical PC edition will not have any game data on the disc, but rather the disc will contain the Epic Games Store installer. Players who selected a PC key as their reward will still be able to claim a Steam key, but they'll have to wait for one year after the game's launch to get it.

Any backers not happy with this will be able to change their key from PC to PS4, should they so choose. Alternatively, Ys Net say that they have agreed with Deep Silver and Epic Games that refund requests will be honoured, with more details on the refund process to be announced in a subsequent update.

In explaining their decision, Ys Net said that 'As a publishing partner, Deep Silver has greatly contributed not only to sales and marketing, but to scaling up the game so there is more Shenmue III to begin with. Also, Epic Games has been with us from the start of the project when we adopted Unreal Engine 4 for development, and have given us their support throughout the development process. '

'In response to backers who have requested Steam keys for their rewards, we discussed offering the keys on the day of release. However, coordination with the sales policies of the involved companies was untenable, and as a result we are not able to make a day one distribution option for Steam keys available.'

The update closed with a statement from producer Yu Suzuki, who said 'I first want to thank all of you for your enduring support from the bottom of my heart. This announcement was made in the coordination of all our partners. As such, it was not presented in a timely fashion which I apologize for.'

Suzukui continued: 'Along with the significant project changes at the heart of this announcement, there have been many other changes since our original assumptions. I believe, however, that the game overall has been strengthened and that Shenmue III has assuredly been transformed and is heading in a positive direction.'

Shenmue III is set for release on Xbox One, PlayStation 4 and PC on November 19.