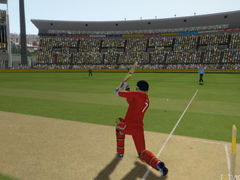 You’ll never believe it, but Ashes Cricket 2013 is out today

505 Games has sneaked out the PC version of Ashes Cricket 2013 today after delaying the game four months ago.

The game launches to zero fanfare from the publisher following the second day of The Ashes return leg in Brisbane.

The PC version is available to buy on Steam for £13.99. The Xbox 360, PlayStation 3 and Wii U versions have still not been dated.

Early indications suggest that the game may not be the up to the quality many had been hoping for, with one Planet Cricket user calling the game a “heap of crap”.

“The game is clearly not finished but that does make you laugh when the keeper starts grinding on the batsman,” said another player.

505 Games has yet to release any gameplay footage of the game beyond a short Vine clip, despite the title first being announced in September 2012.

Still, that hasn’t stopped early adopters grabbing footage (below) from the PC version. Watch it and weep.