XCOM: Enemy Within Revealed - Everything we know in video form - VideoGamer.com 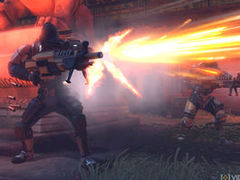 XCOM: Enemy Within Revealed – Everything we know in video form

2K Games has announced a substantial expansion to XCOM Enemy Unknown, titled Enemy Within. We thought about writing a preview listing all the new features, but XCOM super-fan Matt (@Jam_sponge) wanted to make a video instead, and, well, you don’t argue with a man who possesses that hair.

XCOM: Enemy Within takes the experience from XCOM: Enemy Unknown and adds an array of new abilities, upgrades, and weapons to combat new enemy threats. The expansion also provides players with all-new maps, tactical and strategic gameplay, and multiplayer content. Fans will experience an additional three to four playthroughs on average before encountering all of the new material included in XCOM: Enemy Within.

On PC and Mac, XCOM: Enemy Within features additional content that can be enjoyed with previously purchased copies of XCOM: Enemy Unknown.

XCOM Enemy Within will be released November 15 for PC, Mac, Xbox 360 and PS3.

For more video entertainment from Matt and the rest of the VideoGamer.com team (including child-faced blame-bringer Chris Bratt), head over to our YouTube channel.