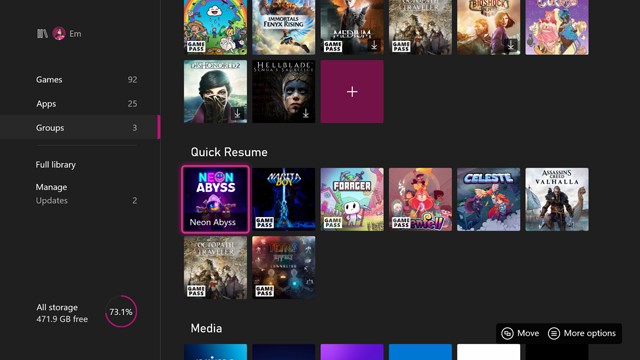 Eden Marie revealed that the update is currently rolling out to those enrolled in the Xbox Insider program’s Alpha and Skip-Ahead groups, and sees a new ‘Quick Resume’ group added to the Groups section of the My Games and Apps section of the console. In this, users can now see at a glance which games, if any, are currently stored in Quick Resume at a glance. In addition, the update will also allow users to remove a game from Quick Resume and remove the save state without having to re-launch the game and quit out manually.

In case you’re somehow not up to speed, the Quick Resume feature uses the Xbox Series X|S’ internal SSD to allow games that use the feature to be suspended at any time and allow you to launch other games at the same time, without having to drop back to the menu or even lose your progress mid-game. The forthcoming update will also now finally allow you to see which games support the feature at a glance, making Quick Resume even more useful when it rolls out to everyone else hopefully by next month.

In the meantime, this month’s April update has also begun rolling out overnight to all Xbox owners, adding new monthly achievement leaderboards and allowing you to join friends who are playing Xbox Game Pass games right from the dashboard. The update also offers the ability to suspend any currently running games stored in Quick Resume in order to speed up downloads. You can find more information on that update here on the Xbox Wire.