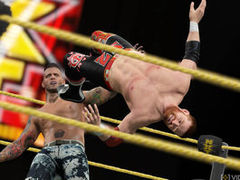 WWE 2K15 will render at 1080p on both PlayStation 4 and Xbox One, 2K Games has confirmed. The game is also expected to run at 60fps.

Brett went hands-on with the game earlier this month and came away impressed by the next-gen version’s revamped presentation.