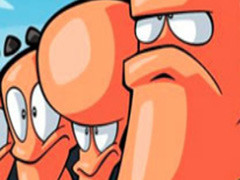 Two of the first Xbox One games released under the [email protected] program will be a new Worms game from Team17 and Nutjitsu from Ninjabee.

The games were revealed by Phil Spencer, corporate VP of Microsoft Studios.

“Played 2 of the first shipping games, a Worms game n Nutjitsu, right before DICE,” he tweeted.

Worms is the long-running turn-based franchise from Team17, whilst Nutjitsu is from the team behind the XBLA Kefling titles – the game’s out now on the Windows Phone store.

The Windows Phone listing states: “Enter the squirrel! Defy the kitsune samurai who have stolen your clan’s sacred acorns. Sneak through beautifully hand-painted landscapes, avoid capture by the guards, and snatch victory (and acorns) from your enemies.

“Steal back precious acorns across unique levels as you dodge an ever-increasing number of villainous foxes. The vigilant foxes can track your silent steps by scent. Keep ahead of them or disappear in a cloud of smoke. Grab as many mystical treasures as you can before disappearing into the night. Master the way of Nutjitsu!”

Both titles are expected in March.