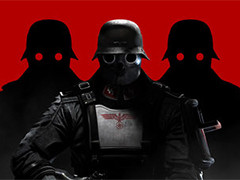 The next Wolfenstein game could be called ‘Wolfenstein: New Colossus’, according to a tease dropped during Bethesda’s E3 press conference.

While the game wasn’t officially revealed during the publisher’s show, a teaser (captured by @Duke_Bilgewater) appeared in a fake boot up screen opening the conference alongside the names and release dates of earlier Wolfenstein games.

The release date for New Colossus is starred out, although earlier rumours hint at a 2017 release.

Last year, Wolfenstein: The New Order actress Alicja Bachleda-Curus revealed that she is “working on a video game, first part of which I have already made. Now we’re making a second one, which will take two more years.”

Wolfenstein: The New Order is described as a re-imagining of the classic…

Wolfenstein: The New Order is described as a re-imagining of the classic…