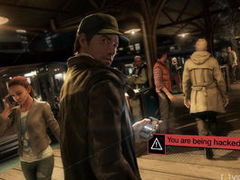 Watch Dogs’ Aiden Pearce now has realistically-animated thumbs thanks to the extra development time afforded to the game by its six month delay, animation director Colin Graham has told the Ubi Blog.

“We animated Aiden’s thumb movements so he’s better at hacking,” Graham explained. “For example, when he hacks a tower, you’ll see he clicks on the screen properly with his thumb. We didn’t have that quite right before.”

Nimble fingers aren’t the only piece of impressive animation you’ll find in Watch Dogs, which Graham says is possible on the new generation systems because of the increase in memory availability.

“The animation is always a bottleneck on memory, so we can have a lot more diversity and variety now,” he explained.

Other examples of this animation system include guys flipping signs in front of shops, living statue street buskers and Chicago’s bucket drummers.

“You will never see the same thing twice, guaranteed,” Graham concluded. “Your experience is unique. You go around this corner and the ten people that are there will be ten completely different people. Ten different profiles, ten different backgrounds, different actions, different combinations of actions.”