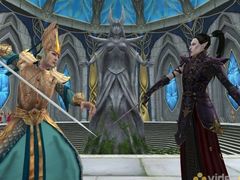 The game launched worldwide on September 18, meaning the game notched up its 1.2 million sales in only 12 days – not bad going by any means. The real test for a new MMO is how many subscribers it can hold on to; it’s still very early for WAR, but EA notes there are currently 800,000 players. How many of these will stick around once their initial free trial expires is yet to be seen.

To put the 800,000 players into some context, Blizzard recently confirmed that World of Warcraft has a subscribership of 11 million players.