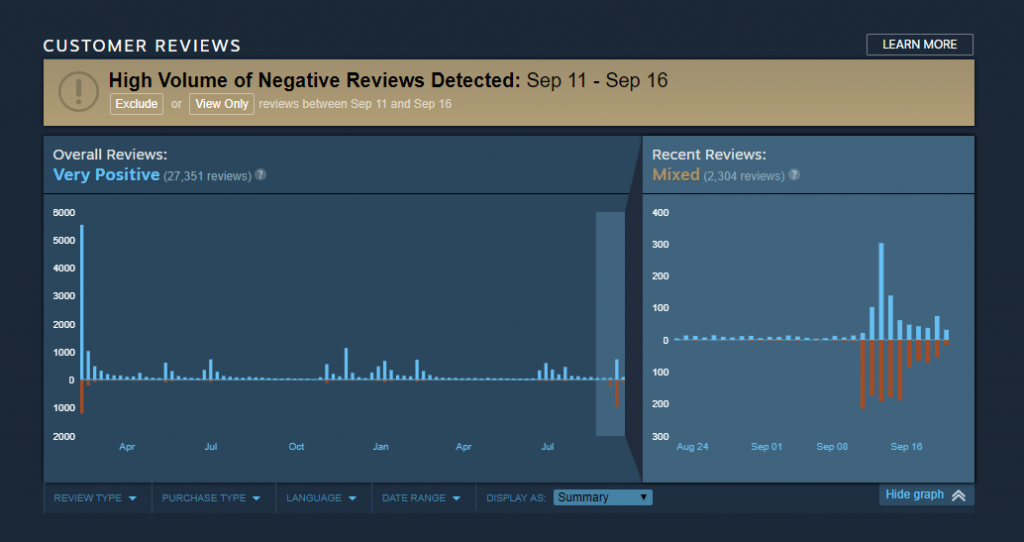 Valve responds to review bombing on Steam by adding a chart

Steam has added a new histogram feature to its game reviews, which will give the user an option to see how a game’s user reviews have changed over a period of time. This change has been implemented in response to the ongoing trend of review bombing. Valve’s Steam UI designer, Alden Kroll, wrote a lengthy blog post discussing the change and why it’s been brought in now.

Review bombing is where users negatively review a game en masse, usually as a response to the developer’s actions, or, as Kroll puts it, in protest of ‘choices the developer has made in the Steam version of their game relative to other platforms, or simply that they don’t like the developer’s political convictions.’ Sometimes there can be a genuine reason why users opt to negatively rate a particular game, but in many cases, according to Kroll, these are often related to out-of-game issues that aren’t very relevant when it comes to the value or quality of the game.

The most recent example was in response to Firewatch, after the developer Campo Santo issued a DMCA against YouTuber Felix ‘PewDiePie’ Kjellberg following a racist outburst in a livestream. Some folks weren’t happy about the developer’s response, and they decided to review bomb Firewatch on Steam in an attempt to destroy the game’s credibility. Usually these instances only impact the game temporarily, and Kroll said that, ‘it was even clearer – the review bomb ends up being a temporary distortion of the Review Score.’

Another recent example of review bombing followed the delayed PC release of Sonic Mania, which was possibly due to the implementation of the controversial Denuvo DRM. This led to lots of negative reviews from users who disagreed with (and were also angered by) the use of Denuvo for the game, and its subsequent delay as a result. In this instance, the negative reviews were in protest at the inclusion additional software, which could possibly impact on the performance of the game, and also because of Sega’s lack of transparency on the matter.

Kroll continued to discuss Valve’s thought process in depth. The change will enable potential buyers to check how a game is being reviewed over time rather than following a controversial opinion or feature change. ‘As a potential purchaser, it’s easy to spot temporary distortions in the reviews, to investigate why that distortion occurred, and decide for yourself whether it’s something you care about’, said Kroll. ‘This approach has the advantage of never preventing anyone from submitting a review, but does require slightly more effort on the part of potential purchasers.’

For more information check out the Steam blog.