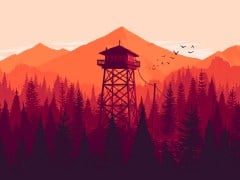 Firewatch isn’t any of the things I expected it to be. Firewatch is a game about escape, loneliness, friendship and facing reality, told in a tightly controlled explorable world and with some top class writing and acting. From a team who cut their teeth on Telltale’s The Walking Dead, Firewatch feels like a natural and smart evolution, offering choices without as many constraints, but at the same time expertly funneling players down a path.

Henry takes a job at a firewatch station in Wyoming’s Shoshone National Forest. He’s going to be alone most of the time, sat at his post ready to report any sign of fire. For reasons I won’t go into, this is fine. He needs some time alone. It’s somewhat revealing, then, that it is Henry’s relationship with his boss, fellow firewatch station sitter, Delilah, that forms the centrepiece of the game.

Armed with a two-way radio, Henry and Delilah talk. You can make conversation choices and this shapes how things play out – at one point I pissed Delilah off so she refused to talk to me for a while. While the relationship begins a bit awkwardly (Delilah is Henry’s boss so is always telling him what to do) it soon develops and the two open up to each other and discuss their complicated lives.

Henry is given tasks that see him set out into the great outdoors, wandering around in first-person, hopping over obstacles, climbing up to ledges, parasailing down cliff faces, hacking down trees and all kinds of other things you might expect someone to do when trying to make sure people aren’t causing trouble in the forest. It’s all single-button-press stuff rather than anything overly ‘gamey’ but it’s interactive and gives the sense that you are out there, doing your job. As you complete tasks days pass (often more than one at a time) and things start to develop that suggest all isn’t right.

Discovering what’s going on is part of the Firewatch experience, but the game does a brilliant job of unnerving you. This isn’t a horror game, not even close, but the sense of isolation is played on superbly, so even little things get under your skin. Your only connection to humanity is Delilah, and I found myself trying to radio her even when there was no option to do so. I guess I just wanted to speak to somebody. The dialogue is excellent and the acting natural, and there’s some sparingly used but effective music.

On PS4 Firewatch has some performance issues and looks a tad ropey if you look at it from a technical perspective, but get over that and this is a beautiful game. The use of colour is wonderful and the little details you can find help flesh out and explain what’s going on. You’re given a camera to take a limited number of snaps with, and it’s hard not to splurge them all in a matter of minutes. Don’t hold out too much, though, as the game is over in an afternoon of solid play.

It’s hard to say if Firewatch is simply a snapshot of a small part of a particularly hard part of someone’s life or if it’s saying something more. Henry, his struggles and choices, have stuck with me for the last couple of days, so I don’t think it needs any deeper meaning. Firewatch is a brief adventure, but it feels right. Henry has things to face up to and you won’t feel shortchanged by the game’s conclusion. It’s just time to move on.

Unlike Tom I did feel a little shortchanged by the conclusion of Firewatch, but I suspect that’s mostly because I’m a demanding child. There are no neat endings in real life, so there’s no reason that I deserve them in video games. Is that a spoiler? I don’t know. You might think the ending is neat if you play it.

I recommend that you do – the caveat being that you understand that Firewatch is what it is, and what it is is a story that happens to be told via the medium of a video game. It’s a pretty good story, too, with a bait and switch that you might not be expecting, although (like Tom says) a lot of it is about the relationship you build with Delilah in the next tower, which can be surprisingly complicated.

You never see another person, but you can find traces of them: where they’ve been, relationships they built with others over swapped notes. Then there’s the forest itself. Different areas of it seem to have different personalities, which alter again as the day goes from morning to midday to night. I ended up taking my job as protector of the forest very seriously; I cleaned up any cans I found, arduous process though it may have been, and took pictures documenting vandalism or untended fires rather than the landscape. It’s not a long game, but it’s an involving one. Nothing wrong with that.

Firewatch feels like a natural and smart evolution of the adventure game, offering choices without as many constraints, but at the same time expertly funneling players down a path.
8 Excellent acting Beautiful setting Smart writing Looks rough on PS4