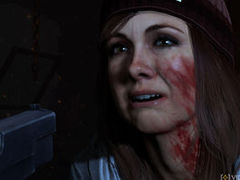 Until Dawn won’t be an ‘endless stream of jump scares’, says Supermassive

PlayStation 4 slasher horror Until Dawn won’t simply be a series of jump scares, Supermassive Games has said, aware of how quickly such a game would get old.

“We were aware from early on that we didn’t want the game to be an endless stream of jump scares,” Supermassive Games’ Jez Harris told PlayStation Blog. “People just become numb to it.”

He continued: “To make the horror as effective as possible you need to telegraph in some of the scares and then obscure others, otherwise players get wise to a formula.

“So a lot of Until Dawn is about the quiet dread of not knowing what’s going to happen next. You might think there’s a jump scare coming any second, and then there’s nothing for five minutes – when you’re not expecting it. It has more impact that way.”

“What we’re doing here is making a playable horror movie,” he explained. “How you’d sit and watch a horror movie at home is probably how you should play Until Dawn. For me personally, that would definitely be with friends.

“I wouldn’t want to do it on my own. I’d be too scared!” he concluded.

Until Dawn promises nine hours of horror in which all playable characters can die, with the story adapting and continuing to one of hundreds of endings.

There’s no word on a firm release date just yet, but you can expect the game at some point this year.