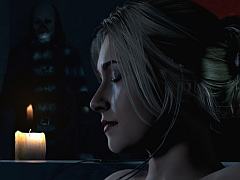 I do enjoy a cheesy slasher movie. They are mostly incredibly predictable, following the same tropes each and every time, but they are fun. Not fun for the people in them, obviously, as they usually end up with a hook through their head, or with their head sliced off, or burned alive, or skinned, or slowly spun down a massive screw – yes, I’ve seen Jason X, at the cinema no less, and it was brilliant. Until Dawn is, as you may have worked out by now, a take on the teen slasher movie genre, offering a casual-gamer friendly control scheme (think Heavy Rain and you’re basically there), gorgeous visuals, great performances and the chance to shape the story with your choices. And I think a lot of people will enjoy it immensely. I did.

I’m not going to go into much detail at all about the storyline as it’s the central part of the game and you’re best off going into Until Dawn with as little knowledge as possible. Teens are at an isolated snowy retreat, bad stuff happens – that’s enough. Just know that the writers have done a good job here, managing take what is usually crammed into 90 minutes and stretching it over a good 7+ hours. The benefit of this added time is some excellent character building, with the cast of teens each being fleshed out (some in better ways than others). Some start likable and end up being dicks (through your choices) while others will grow on you, should they remain alive long enough.

How you shape the story is handled very well, with key moments causing big shifts and others slightly altering the current scene or the way characters feel about one another. I played through the entire story once, and my conclusion felt like a good fit for what had gone in in the hours prior, but I know things could have been very different. I replayed certain chapters (the game allows you to do this once you’ve finished) to see how I could rewrite history and, yes, actions can completely change how things play out. It’s surprisingly well done. A second playthrough would obviously follow the same overarching storyline, but what happens to each character and who survives will be different if you don’t repeat the same choices.

Until Dawn is designed for everyone to see it through to the conclusion, so gameplay here is simple. When in direct control of a character you can only walk or walk a tiny bit faster (somewhat strange given the situations they find themselves in at certain points), with the right stick used to direct a light source or look around – there’s no third-person camera control, which will make the game extremely easy for anybody to pick up and play and allows for some lovely, creepy camera angles. Quick Time Events handle more intense moments (with some really rather snappy button prompts popping up), but these work well and ramp up the tension.

Combat is generally handled by scenes that sort of resemble how light-gun shooters used to play when you used a controller, but thankfully here they don’t feel terrible. Whether you’re using a gun or a melee weapon, a target appears on-screen and you have to guide the aiming reticule over it before the timer runs out – although sometimes, as with other choices in the game, not doing anything might in fact result in the better outcome.

Motion controls let you aim using the DualShock 4 or spin it around when prompted, but these can be turned off entirely and replaced with analogue stick movements. The only motion control element forced on you if you opt for normal controls comes when your character must remain still in order to avoid being spotted – while holding the controller still sounds simple enough, I must admit that the tension got to me once and I moved just enough to cause… well, let’s just say that never before has so much carnage been caused by a PS4 controller being moved a few millimetres.

Graphically, the game looks great. The frame rate isn’t quite as high as I’d have liked (you do get used to it), but the environments and lighting are top notch. Character models deserve a special mention, which are about the most believable I’ve seen in a video game, offering some excellent facial animation that helps sell you on the performances. I felt the audio was slightly out of sync with their lip movements, but it’s a minor distraction that didn’t bother me for long.

On the subject of little niggles, while I really enjoyed the story and most of the dialogue, I’d have liked the game to have a slightly sillier tone. The characters do throw out some one-liners but most die before the final word has hit the air, and there’s very little else to lighten the mood. The set-up for the entire scenario is also, to me, completely ludicrous, but easy enough to gloss over as this is just a teen slasher video game. I know I’ve mentioned how well-suited this is for casual players, but in order to fail you really have to be rather terrible at pressing buttons, meaning that some outcomes will only be triggered if you deliberately mess up a sequence – a harder mode wouldn’t have gone amiss.

After 30 minutes I expected Until Dawn to be a silly horror game that was mostly terrible but got pulled through thanks to the sheer idiocy of everything going on. That isn’t really the game it turned out to be, with what’s on offer being a lot better than I gave the developers credit for. In terms of gameplay mechanics it’s incredibly simple, but that works in its favour, leaving you to become fully engrossed in the thrilling and malleable storyline. If you fancy a gory treat that hits plenty of high notes, Until Dawn is highly recommended.

Note: Until Dawn is pretty scary. But if you think you’re hard enough to laugh it off, we made our own sequel: UNTIL DAWNER. Check it out here

If you fancy a gory treat that hits plenty of high notes, Until Dawn is highly recommended.
8 Choices make a difference Looks lovely Great schlocky horror performances Failure is tricky at points