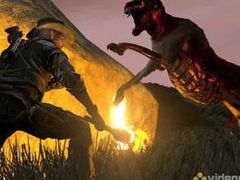 Rockstar has revealed that the Red Dead Redemption Undead Nightmare standalone game will be released in Europe on November 26.

The standalone release not only includes the Undead Nightmare DLC (a new single-player campaign and new multiplayer gameplay), but also the previously released Outlaws to the End Co-Op Mission Pack, the Legends and Killers Pack, the Liars and Cheats Pack and all the Multiplayer Free Roam modes.

Look out for a review tomorrow. In the meantime check out the Undead Nightmare Extended Play.

A standalone release priced at under £25 isn’t too shabby when you consider you get a fairly meaty 4-6 hour campaign and a host of muliplayer modes. We’ve seen full-price games ship with less content.

It’s also great for gamers who weren’t interested in the original release, but have been tempted by the inclusion of zombies in the DLC.

While we can’t see this matching the success of GTA4’s Episodes from Liberty City standalone release, it should still be a middling success for Rockstar.