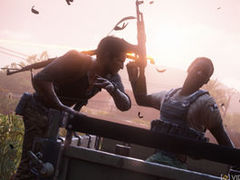 Uncharted 4’s release date remains set for May 10, Sony has confirmed, despite a stolen shipment of copies currently circulating in the UK.

Sony confirmed earlier today that a “number of copies” of Uncharted 4 had been “stolen while in transit”, later telling MCV that the theft had occurred during a “violent assault”. It’s suggested that other video games and DVDs may have also been stolen during the raid.

“We are doing everything in our power to assist the police in their ongoing criminal investigation,” a PlayStation representative said. “To be clear, we have yet to ship any stock of Uncharted 4: A Thief’s End to retail and so any suggestion that UK retailers have broken the official street date is not correct.

“The official release date of Uncharted 4: A Thief’s End remains May 10th.”

Some fans have called for Sony to consider releasing the game early to help avoid spoilers leaking online ahead of release. Yesterday, creative director Neil Druckmann asked fans to “stay vigilant”, stating that it will get “harder and harder to control leaks” in the run up to launch.

VideoGamer.com has also spoken to two UK gamers who managed to purchase a copy of the game yesterday, two weeks ahead of release.