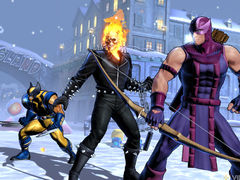 Ultimate Marvel vs. Capcom 3 will be released this November for PlayStation 3 and Xbox 360, Capcom has announced. The enhanced game will retail at a “mid-range price”.

The refined and enhanced version of Marvel vs. Capcom 3 will feature eight new stages and 12 new fighters, bringing the overall roster to 50. The first new characters revealed for Ultimate Marvel vs. Capcom 3 include Capcom favourites Strider and Ghost ‘n Goblins villain Firebrand. From the Marvel stable comes Ghost Rider and Hawkeye.

In addition, Ultimate MvC3 also features a host of enhancements and new features to improve the game’s balance and online functionality. The big addition is the introduction of the fan-requested Spectator Mode, which allows fighters to watch live online matches together.

Look out for a steady stream of character reveals in the run up to the game’s November release. For an idea of what to expect check out our Marvel vs. Capcom 3 review.