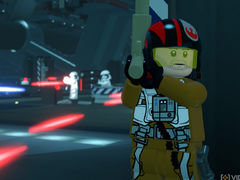 LEGO Star Wars: The Force Awakens has made it to the top of the UK Video Game Charts for a second week. Sales of the game fell by 54% week-on-week, but were helped by the debut of a Wii U version which followed one week after launch.

Overwatch overtakes FIFA to climb one place into No.2, as does DOOM, which continues to perform well at No.3. FIFA 16 falls to No.4, while Rocket League climbs two places to round out the top 5.

Last week’s biggest new release, Carmageddon: Max Damage, failed to make a dent on the entire top 20, however, debuting at No.22. It’s been a bad week for Star Ocean: Integrity and Faithlessness, too, which falls from No.6 to No.38 in just its second week.

Disney Art Academy and MX vs ATV Supercross Encore are the only two major games hitting retail this week, although both should have a decent chance at a top 20 entry.