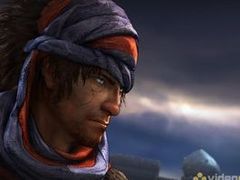 Last week we sat down with Jan-Erik Sjovall, animation director on Prince of Persia: The Forgotten Sands, to talk about the return to the more action-heavy, heavy metal prince found in The Warrior Within.

With the series having returned to its roots, what does this mean for 2008’s Prince of Persia, which featured beautiful cel-shaded visuals and unique gameplay which meant the player never died – a minor side-step in the series’ history or an offshoot to be further explored?

“I’m still behind a lot of the decisions that were made for 2008 because they were fresh,” said Sjovall. “It was a new approach, and I have no issues having a beautiful woman hold my hands every once in a while. But it was interesting to see the reactions of players, and to hear the feedback.”

“We have to look at how many Prince of Persia and Assassin’s Creed, similar types of adventure title can be in our catalogue. I’m an animation director, that’s way beyond my thing. But it’s a business decision, they have to figure out what they want to do with the IP.”

So will we see another game in the style of the cel-shaded prince? Sjovall isn’t sure.

“It’s not abandoned,” he said. “What I liked about Prince of Persia 2008 was that it appealed to women a lot. We have to bring more women into the games industry, it’s a male audience. And then all of a sudden you have a game like Prince 2008 where all the female journalists, all the female gamers come out and say “I love this game!”. How is it that males don’t like this game? It’s bizarre. The gaming industry has nothing really controversial going on, but that was close. It was polarising the audience.”

We happened to think the 2008 effort was pretty special, awarding the game a well-earned 9/10. For more from Sjovall, head over to our interview in full.