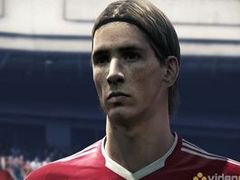 Konami has announced that Liverpool FC and Spanish international striker Fernando Torres is to join Lionel Messi as a cover star of PES 2010.

“Everyone knows that when it comes to football simulation, Konami’s PES series is by far the most realistic title available,” commented Torres. “The new game looks absolutely stunning, and I look forward to seeing myself in action in PES 2010.”

“Fernando Torres has established himself as one of the most exciting strikers in the game,” added Jon Murphy, PES European Team Leader. “He encapsulates everything that is good about the modern game, showcasing both pace, skill and vision – three elements that play a major part in PES 2010 as a football simulation.”

Enhanced Realism: PES 2010 delivers a pace of game in tune with football played at the highest level. Triangulation of passes and use of off-the-ball runs are key to breaking down the opposition, forcing the player to use the strengths of their team mates to create scoring opportunities. Gone are ‘soft’ goals that can be used to break the deadlock; instead, only working the channels and the precision play expected of great players will make a difference.

Player Characteristics: Key skills of the many players have now been attributed names, allowing users to incorporate them into their play strategy. Cover star Torres, for instance, is renowned for his ability to receive a pass in the penalty area, and to drop the ball to a teammate in a good position for a goal-scoring opportunity. As such, he is labeled a ‘Fox in the Box’ and Goal Poacher’, in line with his prowess in both scoring and setting up goals. Player characteristics are more vividly reproduced by these names.

Instant Tactical Switching: Konami has already unveiled its new tactical bar system related to PES 2010’s attacking and defensive elements, but can now reveal additional information. Each team has unique settings matching their real-life playing styles. Torres at Liverpool, for instance, will recreate the Merseyside club’s sophisticated play and high numbers in attack, their pressing from midfield, strong defensive line, and width across the pitch. For the offence, the default settings support wide attacks and the aim to move in the back of the opponent’s defence line. The user can summon the bar instantly during a match to adjust team tactics to enhance their defence or strengthen attacks.

Master League: The Master League now incorporates both the Champions League and Europa Leagues in its content, offering a complete season for players to enjoy. Success in the Master League will see players streamed into these competitions. The lure of European football can also be used to attract stronger players to your side, with transfer dealings and contracts now significantly more realistic in their use.

Commentary: PES 2010 reunites Jon Champion and Mark Lawrenson in the game’s virtual commentary box, but in a more effective way than before. The commentary is now more tied to the action, with comments detailing player ability, significant match history and analysis, within a more concise and detailed delivery designed to mimic the presentation of games.

PES 2010 is scheduled for release in the autumn for PS3, Xbox 360, PC, PSP and PS2. Konami will reveal details on the game’s online elements and DLC plans in the weeks ahead.