'Thousands of pounds' worth of Nintendo games stolen from lorry in Northamptonshire - VideoGamer.com 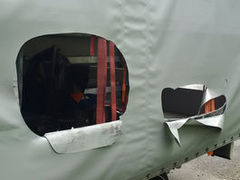 “Thousands of pounds” worth of Nintendo games were stolen from a lorry in Northamptonshire last week as the driver slept at a service station.

The thieves are said to have cut open the side curtain of the lorry overnight last Wednesday, April 13, before making off with the goods. It isn’t clear which games were stolen or whether it has affected today’s launch of Star Fox Zero.

It also isn’t clear whether the lorry was transporting the games directly on behalf of Nintendo or a third-party distributor/retailer. VideoGamer.com has contacted Nintendo UK for comment.

The theft follows less than a year after a lorry load of Wii U shooter Splatoon and various Amiibo figures were stolen from Nintendo. That vehicle was said to have been transporting the stock from Nintendo’s European HQ to GAME’s UK warehouse.

Northamptonshire Police asks anyone with information on last week’s theft to contact them on 101 or to contact Crimestoppers anonymously on 0800 555 111.