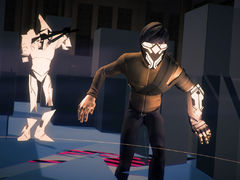 Volume: Coda, a free 30 level PlayStation VR expansion to the original game will be demoed to press at E3, but so kind is creator Mike Bithell that he’s gone and released a teaser trailer for everyone to see.

Exclusively created for PS VR, players will guide their character around stealth missions as before, but now all set within what’s described as an “immersive story environment, with a cool holographic simulation floating in front of you”.

The story is a continuation from the main game.