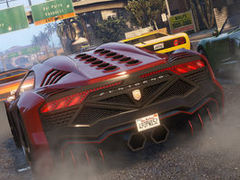 These are all of GTA 5’s PS4, Xbox One and PC upgrades and enhancements

We know that GTA 5 on PS4, Xbox One and PC boasts vastly improved visuals, a new first-person game mode, new songs and an increased GTA Online player count, but you may not be 100 per cent clear on the finer points of the upgrade.

Rockstar has helped us out by sending over a list of all that’s new with GTA 5 on PS4, Xbox One and PC.

Upgrades and enhancements include:

The integration of the new first-person mode means players will have the freedom to play GTA Online in either first-person or third person with the ability to seamlessly switch between them on the fly at the touch of a button, both in Free Mode and during matches. In addition, we’ve added the option to toggle match settings to create first-person or third-person only matches, if they choose.

You can see these upgrades for yourself in the new comparison trailer below.