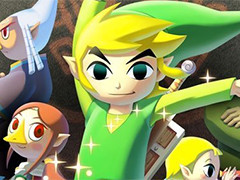 The Legend of Zelda: Symphony of the Goddesses concert returns to London on April 17, 2015

The Legend of Zelda: Symphony of the Goddesses concert series is coming back for a third worldwide tour next year entitled ‘Master Quest’.

Promising new music and visuals from the latest games in The Legend of Zelda series, the tour will begin in Nashville on January 21 and 22, and conclude in Houston next October.

The Master Quest tour touches down in the UK on April 17 for a one night performance at Wembley Arena.

New dates for Europe will be added soon.

“The continued excitement around The Legend of Zelda franchise is amazing, and this special concert will deliver an unforgettable experience for fans,” notes Jason Michael Paul, president of Jason Michael Paul Productions, Inc, which is producing the concert tour. “These performances transcend culture and geography and unite people through a common love for this venerable and legendary series.”