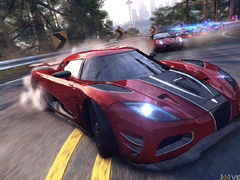 The Crew on Xbox 360 is ‘the same game’ as PS4/XB1 versions, still features ‘entire USA’

Ubisoft has revealed more details about the Xbox 360 version of The Crew, confirming to VideoGamer.com that the last-gen version is “the same game” as its Xbox One, PS4 and PC counterparts, complete “with the same scope, core features, storyline, missions, activities, and overall driving experience as the new gen platforms”.

“Our approach for the Xbox 360 version was to deliver the same game, with the same scope, core features, storyline, missions, activities, and overall driving experience as the new gen platforms,” a Ubisoft representative told us.

“It was quite a technological feat to recreate this massive open-world filled with content, gigantic in scope, on Xbox 360. The entire USA is your driving playground with the same variety and density of missions to be found in the new gen versions, covering thousands of square miles, from city to suburb, state to state, and coast to summit.”

Xbox 360 players won’t experience any loading screens “when cruising around the world map in your car,” either, “just like the Xbox One & PlayStation 4 versions.

“The only loading screens you will encounter are at the boot-up of the game or when you enter your HQ, car tuner, etc… again identical to the versions on the other platforms.”

However, as with the PS4, Xbox One and PC versions, it will also require the same permanent internet connection to function.

“The Crew is genuinely built as a living-breathing world, filled with challenges, opportunities and new players to meet,” Ubisoft continued. “An online connection is mandatory because it’s a key element to the core experience of the game.”

Ubisoft announced an Xbox 360 version of The Crew earlier today for release alongside the Xbox One, PS4 and PC versions on November 11.

An Xbox One and PS4 closed beta is due to begin next month.