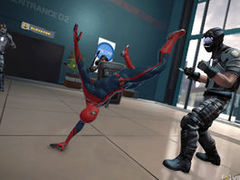 The Amazing Spider-Man Ultimate Edition will be released for Wii U on March 8, Activision has announced.

This Wii U version includes four DLC packs on the game disc, plus unique Wii U gameplay elements including off-screen support and using the GamePad as Spidy’s Oscorp OsPhone.