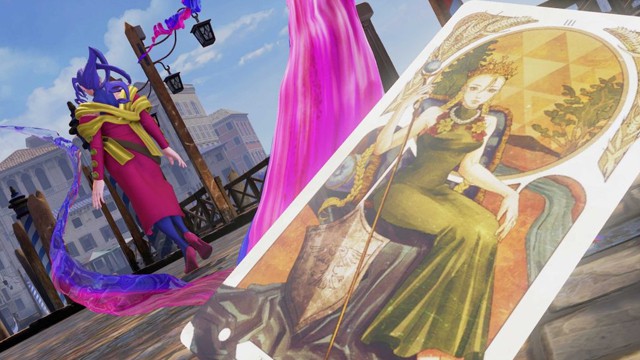 Street Fighter V welcomes its latest fighter to the roster in the form of Rose today, and Capcom has released a new character gameplay trailer to celebrate her arrival.

As detailed in the recent Street Fighter Spring Update, the fortune teller arrives with a wealth of moves at her disposal, including V-Skill I 'Soul Fortune' that can give her buffs or debuff opponents, or her V-Trigger I 'Soul Dimension' that allows her to teleport around the arena.

Her other V-Skills include 'Soul Satellite' that allows her to summon orbs that can negate projectile hits and defend her, while V-Trigger II 'Soul Illusion' will summon a mirror image that performs the same commands as her and offers her foes double trouble.

Today's DLC drop also comes along with a brand new stage in the form of the Marina of Fortune, and naturally there's also five costumes for you to get for the new character. Rose is available today in the game through the usual methods or via the Season 5 Season Pass along with Dan, with more characters including Rival Schools' Akira on the way.

Rose is available now in Street Fighter V: Champion Edition on PlayStation 5, PlayStation 4 and PC. Check out her trailerfor yourself below.