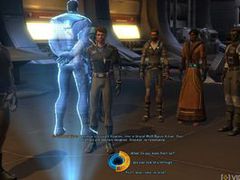 BioWare has released its latest video depicting what to expect in the next major content patch for Star Wars: The Old Republic.

Subscribers to the game will now be able to customise their UI for the first time.

In the video, lead interface artist Michael Voigt explains the process behind designing the customisation system, and lists new features such as three new pre-made layouts that users will be able to use.

Users will also be able to access a layout editor which allows them to customise the UI as they wish.

Update 1.2 is scheduled to release this April.