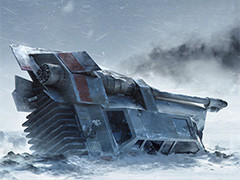 Star Wars Battlefront info coming ‘in the next couple of months’

More details on Star Wars Battlefront will be revealed “in the next couple of months”, EA has confirmed, with the game scheduled to release in alignment “with the Star Wars movie rollout”.

“We’re extremely excited about that and we think there is huge potential for that title,” chief financial officer Blake Jorgensen said while discussing the game during EA’s post-earnings conference call last night.

“More to come in the next couple of months on that as more about the movie comes out as well as more about our titles comes out, but you should consider that a very large activity for us next [financial] year and very large focus, similar to how we thought about Battlefields in the past.”

Star Wars Battlefront will release “before Christmas”, Jorgensen added, although it remains unclear whether the game will arrive day and date with Star Wars: The Force Awakens.

The game is expected to be in development for PS4, Xbox One and PC.

Developed by Battlefield creator DICE, Star Wars Battlefront is described by EA as the “ultimate Star Wars battle experience”, and allows players to fight on foot with blasters, or aboard Speeders, Snowspeeders and At-STs.

The developer is aiming for the game to be “the best Star Wars shooter of all time”.