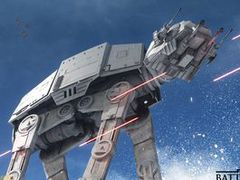 Star Wars Battlefront’s multiplayer beta runs at 900p on PlayStation 4 and 720p on Xbox One, according to a pair of online reports.

Digital Foundry put the PS4 beta through its paces yesterday, discovering a native 1600×900 resolution and a frame rate that manages to hit its 60fps target “for the most part”.

Game Revolution, meanwhile, claims that the Xbox One beta runs at a “blurry 720p”, with one prominent NeoGAF user also criticising it for its “atrocious” image quality. [UPDATE: Digital Foundry has since confirmed that the beta does indeed run at 720p on Xbox One.]

DICE has yet to formally confirm the targeted resolution for Star Wars Battlefront on console or say whether the resolutions will be improved for the final game. If Battlefield Hardline’s beta is anything to go by, however, don’t expect to see any sort of boost.

Star Wars Battlefront launches on PS4, Xbox One and PC on November 19, with the open beta kicking off on all platforms later today.