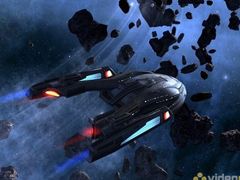 The planned console version of MMORPG Star Trek Online has been scrapped, developer Cryptic has revealed.

The news follows last week’s revelation that work on the console version of Cryptic’s other MMO, Champions Online, has been stopped.

Cryptic Studios boss Jack Emmert said of Champions Online’s fate: “100% of our focus is on making the current PC product the best it can be. There are no current plans for a console version of Champions.”

“It’s pretty much in the same boat as the Champions console version right now,” he said.

“It’s something we can readily do in terms of technology. We’ve had it up and running on certain consoles, and had plans and designs in order to take advantage of those platforms. But as it stands right now it’s a little difficult to make that final leap on the business side of things. So, currently, just like Champions, the console version of Star Trek Online is on the back burner.”

The news is sure to disappoint console-owning Star Trek fans who have been anxiously awaiting news of STO’s arrival on, potentially, the Xbox 360 and PS3.

When Cryptic revealed it was working on Star Trek Online back in July 2008, it said it was being developed for console and the PC.

A number of planned console versions of MMOs have fallen by the wayside in recent months, including Age of Conan, Champions Online, and now Star Trek Online.