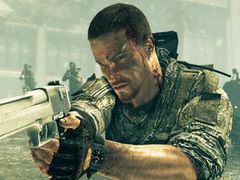 Third-person shooter Spec Ops: The Line hits stores on June 29. We chatted to Shawn Frison, Senior Designer at Yager to get the inside word on the game’s story and characters.

Can you explain the game’s setting and location?

The game takes place in a near-future Dubai where massive sandstorms have destroyed the city and completely cut it off from the outside world. As far as anyone knows, everyone in the city has died.

When you get there, you end up traversing through this environment where a sort of isolated post-apocalyptic scenario has been playing out for several months. The city is absolutely covered in sand, and still wrecked by devastating sandstorms. To some extent, nature has reclaimed Dubai, which really changes the landscape – you might see an Oryx running through the streets, or have to make your way over a giant dune in the centre of the city.

At the same time, the city is still inhabited by the remnants of a civilization that’s struggling to survive, and there’s that element to deal with. We have a lot of explicit narrative moments that deal with this, but there are also lots of subtle little pieces of storytelling in the environment that show how things have been falling apart and how people are coping. So, for instance, starving refugees might be using silk curtains worth thousands of pounds as bandages, or you might see an evacuation sign that’s scrawled with graffiti showing how people lost hope.

We always try to keep this almost surreal contrast between the remnants of Dubai’s opulence and the devastation and horror around you. The city itself is this incredible place already, this almost-utopia that really shows off the power and hubris of humanity. We thought that taking that and destroying it was a great parallel for our characters and the journey they’re going through.

What is the set-up for the events that will take place in the game?

Before Dubai was cut off, the 33rd US Army Battalion was stationed in the area, led by a highly decorated colonel named John Konrad. He was ordered to abandon the city before it was too late, but he chose to disobey and stay behind to try to evacuate the civilians. When the sandstorms came, contact was lost and the 33rd was presumed dead.

Several months later, the US Army received a transmission indicating that Konrad might still be alive in Dubai. They decided to send in a small team of Delta Force operators to investigate.

That’s you. You and your squad are sent to the city, into this very uncertain situation, to try to figure out what happened to Konrad and to Dubai. And then things start to go very, very wrong.

What talent has been involved in writing the story?

Our lead writer is Walt Williams, who’s been involved in a bunch of other 2K properties – Mafia II, the Darkness II, and BioShock 2 were the most recent ones. Additionally, we spent a lot of time working on the dialog with our military advisor, Wil Makeneole. He’s currently doing security detail for the US Department of State over in Oman, and has a background in the US special forces. His input definitely helped a lot to nail that authentic feel.

Did you take any inspiration from famous war movies?

Absolutely! One of our big motivations for making this project was because we felt that the kind of dramatic, mature stories told in movies weren’t well represented in games. So obviously we have that strong Apocalypse Now influence, but there’s something in the war movie genre as a whole that says something very compelling about the human condition. We’re big fans of movies like Platoon, Full Metal Jacket, The Hurt Locker, and shows like Generation Kill. They were a huge inspiration for us, especially in terms of how people react to and are changed by war.

Can you detail the squad and the personalities of the members?

Captain Walker (you): Walker is the squad leader. He’s a troubled man who keeps himself under tight control, always striving to do the best in any situation. He reveres Konrad, who once saved his life in Afghanistan, and has a personal stake in the mission. The military is his life, and he takes his job very, very seriously.

Lieutenant Adams: Adams is the heavy weapons and demolitions expert of the team. He’s fundamentally a down to earth, practical guy who wants to get in, get the job done, and get home. He’s confident in his assessment of the world – he knows what’s right, what’s wrong, and doesn’t hesitate to react appropriately.

Sergeant Lugo: Bucking the stereotype of the stone cold sniper, Lugo is the joker of the group. He’s quick to crack a joke, and can do so in multiple languages. He’s also the youngest and least experienced in the group, and is affected more than the others by the horrors unfolding around them.