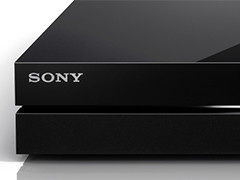 Sony has revealed its latest-generation 4K Ultra HD Media Player – and it looks strikingly similar to a PlayStation 4.

The FMP-X10 features the familiar stacked design of the PS4, but with a flat front and glossy finish. But do you think it looks better? Let us know what you think in the comments below.

The FMP-X10 goes on sale this summer and lets users download and stream 4K films and TV episodes from Netflix and Sony’s Video Unlimited 4K service. It also features 1TB of storage – twice the amount of PS4 – and includes support for Sony’s TRILUMINOUS Color technology.

A price for the device has yet to be announced.

What isn’t yet clear, however, is when Sony plans to introduce 4K support to PlayStation 4 itself.

In an FAQ published just prior to the console’s launch last year, Sony said that “support for high-resolution 4K output for still images and movie content is in consideration, but there are no further details to share at this time. PS4 does not currently support 4K output for games.”

VideoGamer.com has contacted SCEE to ask whether it still has plans to introduce 4K support to PS4 at a later date.