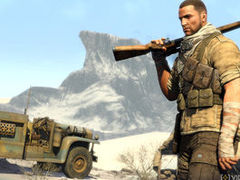 Sniper Elite 3 DLC to include new weapons, no demo planned

Answering questions on the game’s official Facebook page, Rebellion said that the initial release will feature “weapons used in the conflict – so the favourites are back – the M1 Garrand, the British Lee Enfield and Gewehr. We’ll be adding some popular V2 ones and some all-new rifles at a later date!”

Additional multiplayer features could also roll out after launch, too, the developer suggests.

But while all initial DLC is set to release on all platforms, some later DLC may be restricted to Rebellion’s self-published PC version unless 505 Games decides to bring it to other platforms.

“For the initial DLC releases yes [console owners will get access to extra content]!” the developer said. “If we plan more however, the decision on PS4 is completely with 505 Games our publisher- we can’t control that – which is exactly the same for V2 (and we couldn’t bring NZA to 360 because we weren’t a publisher. That was Microsoft’s [old] rule – you had to be a publisher to bring a game to that console. And we weren’t. Simple as that!).

“We have some cool plans for DLC which we’ll be announcing soon, and 505 WILL be bringing the initial content to consoles – but if you want to see all continuing DLC on consoles make sure to support the early DLC and let them know!”

The next-gen versions of Sniper Elite 3 will also take advantage of the hardware to deliver bespoke experiences, with the PS4 version including support for 3D TVs and the Xbox One version letting players “feel Karl’s heartrate through the [controller’s] very cool impulse triggers”.

But if you’re looking to try Sniper Elite 3 before it launches, you may be out of luck.

“There are no immediate plans for a dedicated demo on any format for launch, but we haven’t ruled out one later,” the developer added. “Demos are essentially a separate (but small) game and so require the same lengthy submission process as a new game, and more work for all the teams. We wanted to concentrate on the final game instead rather than take developers off the main project.”