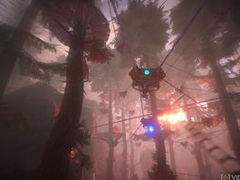 Valley, the next game from Slender: The Arrival developer Blue Isle Studios, will release on PS4, Xbox One and PC on August 24.

Valley sees players strapping themselves into an exosuit to run and jump their way through a mystical forest set within the Rocky Mountains, while having the power to control life and death over the plants and animals around them. Never heard of it? Here’s a gameplay trailer to show you what it’s all about:

“The Valley is a magical hidden wonder in the middle of the Rocky Mountains,” says Blue Isle. “Filled with a variety of wonderous creatures and beautiful vistas, The Valley also holds the ancient Lifeseed relic, which according to legend is a bringer of death on a global scale. The Valley’s predecessors have attempted to harness it before to no avail, and now it’s up to the player to explore The Valley while attempting to capture and harness the power of the Lifeseed for good.”

A price for the game has yet to be confirmed, but expect it to hit Steam, PlayStation Store and Xbox Store later next month.

A first-person adventure from the creators of Slender: The Arrival

A first-person adventure from the creators of Slender: The Arrival