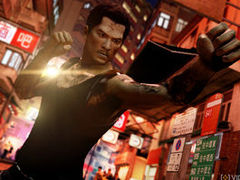 Called ‘Nightmare in North Point’, the DLC offers “the developers’ take on zombie fiction via Chinese mythology”, reportedly telling the story of a gang member who comes back to life to haunt Hong Kong after being tortured and killed by the 18K.

Naturally, it falls to Wei Shen to deal with the gang member and his undead army while fighting off Chinese vampires, the Jiang Shi.

The DLC is said to offer “a few hours’ of content” and is expected to be available for all formats. A price has yet to be announced.

The content sounds similar to Red Dead Redemption’s ‘Undead Nightmare’ DLC, which saw legions of the undead wandering the wild west in search for flesh.

In addition to Nightmare in North Point, Sleeping Dogs’ Street Racer Pack is set to be released tomorrow. The pack includes three new races, including a high-speed boat race.