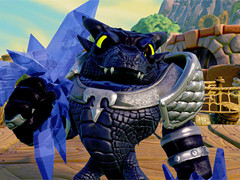 Activision has announced the Skylanders Trap Team Dark Edition, a special edition containing three exclusive figures, a two-sided collector’s poster and an ‘Ultimate Kaos Trap’ that lets players capture and play as the series villain right out the box.

The three characters include exclusive black and silver variants of Snap Shot, Wildfire and Foot Fight, which you’ll only be able to grab with the Dark Edition. A variant of the Kaos Trap will, presumably, be available to purchase separately, although Activision has yet to announce details either way.

The Dark Edition is set to cost $99.99 in the US, although a UK release has yet to be confirmed.

Skylanders Trap Team launches on October 10 and introduces the new Traptanium Portal, a third-generation portal that lets players capture enemies and play as them in-game.