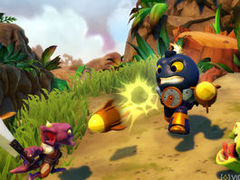 Skylanders: Swap Force will render natively at 1080p on both PlayStation 4 and Xbox One, Activision has confirmed.

The announcement comes ahead of this week’s next-gen launch of Swap Force, which releases on PS4 and Xbox One this Friday, November 15.

The resolution will please some players worried about the performance of multi-platform titles on Xbox One. Microsoft has faced criticism in recent weeks over Xbox One’s performance, with multiple first and third-party titles outputting at native 720p on the console.

Forza Motorsport 5, Kinect Sports Rivals, FIFA 14, NBA 2K14 and EA Sports UFC are the only other retail titles confirmed to render at native 1080p on Xbox One.

Skylanders: Swap Force is the third game in the Skylanders series and introduces a new series of figures whose tops and bottoms can be switched to create all new characters.