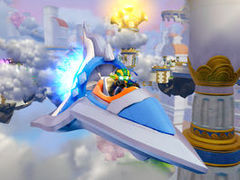 The rumours were true: the Skylanders are taking to the land, sea and air later this year with Skylanders SuperChargers, a new vehicle adventure game heading to PS4, Xbox One, Xbox 360, PS3, Wii U and iPad on September 25.

Developed by Skylanders: Swap Force creators Vicarious Visions, Skylanders SuperChargers lets players get behind the wheel of up to 20 different vehicles, including cars, motorbikes, tanks, speedboats, hovercrafts, submarines, jet fighters, helicopters, rockets and spaceships to drive, fly and sail their way across Skylands like never before.

One vehicle – the Hot Streak Supercar – is included in the game’s Starter Pack, with others available to purchase separately or in packs with the new SuperCharger figures.

Yep, as well as having vehicles to collect in this year’s game, Skylanders SuperChargers also introduces a brand new type of Skylander capable of modding them with cosmetic and stat-boosting upgrades. 20 SuperChargers will be available in total with one of them – Spitfire – included in the box.

All existing Skylanders can drive vehicles, but only the new SuperChargers seem to be able to mod them. Vehicles can only be driven during specific vehicle sections, however, with the on-foot sequences remaining similar to the gameplay found in previous games. Sea and air vehicles are only required to access bonus areas, and are not needed to complete the main game.

Earlier portals will be compatible with Superchargers, too, meaning that if you’ve already bought Giants, Swap Force or Trap Team, you don’t need to worry about picking up the new SuperChargers portal. Plus, if you’re thinking about buying the game on PS4, Xbox One, Xbox 360 or PS3, you’ll also have the option to purchase a digital Portal Owner’s Pack, which includes a downloadable copy of the full game and digital versions of the Hot Streak Supercar and Spitfire SuperCharger. All physical toys and vehicles will be compatible with the digital version.

The physical SuperChargers Starter Pack, meanwhile, will include the game disc, the new portal, the Hot Streak Supercar, Spitfire SuperCharger Skylander and the new Sure Shot Stealth Elf.

The new portal doesn’t include some features found in earlier portals, however, suggesting it may not be backwards compatible with earlier games. The speaker introduced in last year’s Trap Team is missing, for example, and while traps are still compatible, players can no longer use them to trap and play as enemies. Instead, SuperChargers uses traps to grant players special ammo for vehicles. For example, placing a water trap in the portal will offer players water ammo.

It also isn’t yet clear whether Activision has plans to offer a physical version of the game without the new portal, nor is it known how the price will differ between the physical and digital versions.

A “different, complementary experience” to Skylanders SuperChargers will also be available on Wii and Nintendo 3DS, although Activision has yet to detail exactly how that will be different to the main game.

Nevertheless to hear more about what to expect from this year’s game, have a listen to our thoughts on it in the video below or continue reading for our in-depth summary.

EVERYTHING YOU NEED TO KNOW: