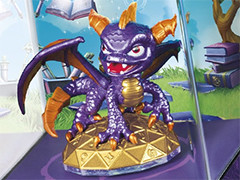 Parents hoping to have a cheap Christmas this year, prepare your wallets: the new Eon’s Elite range of Skylanders will cost a whopping £25.99 each when they go on sale this October – almost three times the price of an ordinary Skylander.

The price was revealed by Amazon with two Eon’s Elite characters – Spyro and Chop Chop – set to launch the range on October 10.

Eon’s Elite characters feature a unique metallic finish and are up to 3x as powerful as normal Skylanders. They also come packaged in a fancy collector’s case.

Standard characters typically cost around £8.99 each.

Despite being based on classic characters, though, the Eon’s Elite range will only be compatible with this year’s Skylanders: Trap Team, the fourth game in the series due to go on sale this October.