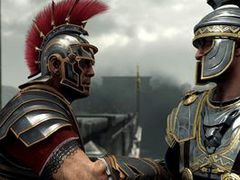 UPDATE: A Microsoft spokesperson has provided VideoGamer.com with the following statement on how microtransactions are implemented within Ryse:

“The progression system in ‘Ryse: Son of Rome’s’ cooperative multiplayer experience offers players the freedom to customize their gladiator with a wide range of armor customization options and upgrades which are accessible across five tiers. Players must advance through each tier by earning experience through gameplay before being eligible to acquire ‘booster packs,’ which contain in-game upgrades.

“Once players have reached a new tier, they may either purchase ‘booster packs’ using in-game Gold earned through battle, real-world currency or a mix of both, and then must continue to play to advance to the next tier (there is no way to ‘buy’ your way to the next tier). Players who purchase ‘booster packs’ with real-world currency will only receive a minor boost in how quickly they acquire the items they’ve earned compared to those who only use in-game Gold.”

ORIGINAL STORY: Ryse: Son of Rome will feature microtransactions to help players accelerate their progression within the game’s multiplayer mode, it has been revealed.

Demoing the game to VideoGamer.com at Gamescom this morning, a Microsoft producer compared Ryse’s system to Mass Effect 3’s multiplayer unlocks and FIFA: Ultimate Team packs, revealing that progression within Ryse’s multiplayer is based around armour unlocks and customisation.

“When we talk about the progression system for multiplayer, it’s armour-based,” said the producer.

“The way that you get armour is very similar to how you get it in like Mass Effect or FIFA. You only earn gold while playing multiplayer [and] you use that gold to buy booster packs. Those booster packs contain random sets of loot. Based on the different tiers of loot that you get – whether you buy Bronze, Silver or Gold Packs – guarantees whether you get rare or common items.

“One of the things that we did a little different is that you can buy them with in-game currency and real world currency. The difference is that if you’re close we also have small microtransactions.

“Say for instance a gold pack costs 15,000 gold, [and] you’ve only got 12,500 you can actually buy the difference and only spend a little bit to make it go to a Gold Pack. So we offer some variety there.”

The producer adds that Ryse’s multiplayer stages have been designed for players who wish to grind for additional experience or gold.

“Just to give you some ideas in terms of how much we have to offer, you can see here, the swords, there’s a ton of different stats,” he continued. “We were very good about designing stages as you play multiplayer, so the stats can change whether you’re focusing on grinding for money, grinding for experience or whether you’re playing with a new player or an old player. There’s a lot of ways to change and customise your gear.”

Ryse: Son of Rome is due to launch alongside Xbox One this November.