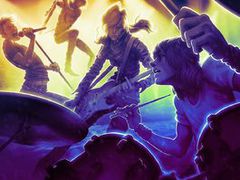 New instruments created for Rock Band 4 won’t include any additional features over the existing last-gen peripherals, and will even sport a similar look to the previous Stratocaster design, according to a report in EDGE.

According to the magazine, the new instruments (which are to be manufactured by publisher Mad Catz) “won’t have any new features. Even aesthetically, they won’t deviate far from the traditional Stratocaster shape, given Harmonix’s ongoing relationship with Fender.

“The unnecessary proliferation of expensive peripherals helped kill off the music genre, after all,” the report adds, “and launching with a shiny new range of essential fake instruments would be in conflict with Harmonix’s current beliefs.”

The article also states that Harmonix is aiming to make Rock Band 4 backwards-compatible “with every existing instrument”, although it isn’t clear whether that extends to instruments designed for rival series Guitar Hero.

The game won’t be compatible with Rock Band 3’s Keytar, however, with the upcoming sequel focussing on guitar, bass, drums and vocals.

Rock Band 4 launches on PS4 and Xbox One later this year.