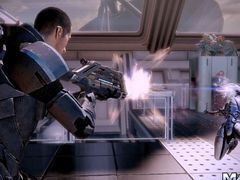 Mass Effect 2 was brilliant. So brilliant that we awarded it a ten out of ten review score. But, as we all know, no game is perfect. Here, in a special retrospective, BioWare lead producer Casey Hudson looks back at the game that redefined the action role-playing genre, discussing with VideoGamer.com what went right and what went wrong with the studio’s epic science fiction adventure.

Q: Thanks for talking with us Casey. Mass Effect 2 received pretty much universal acclaim. It’s even managed some ten out of ten review scores. Did the team know it would be received so well?

Casey Hudson: I think it’s tied for the second highest Metacritic of all time.

Q: Did you think it had a chance at that? How did you feel about that?

CH: Well you can never really predict how a game is going to be reviewed but we knew that… I mean the first Mass Effect was really well received. We knew this one was a lot better. We thought it was. So, that’s really the best we could do, is improve in every way that we are aware of based on our feedback and what we want to do.

Q: Were there any aspects of the game or specific features that could have ended up better?

CH: Well, really when we release a game… we won’t release a game unless we’re happy with everything. It doesn’t mean we wait until everything is perfect. But we wait until we know that we’re comfortable with everything. But there’s a difference though in that than when you turn it over to millions of people who play it and come to a consensus about different aspects of it. That’s where you learn a lot about how the game plays from fresh eyes. So with the benefit of feedback and hindsight there are things we would change which will therefore become part of the design for the next game.

Q: Any areas you have identified?

CH: Yeah. Obviously there’s a lot of great, really positive feedback. But the stuff I think people have commented on that we’ll take to the future are things like the amount of emphasis we had on mini-games, the mining mini-game. Obviously the game being really well received I think reinforces the decisions we made in terms of the way the interface works and the inventory, stuff like that. But there are a lot of people that were happy with the amount of depth that was there, but people that wanted to see it as an RPG versus an action RPG or whatever, I think felt that it needed more depth in terms of your choices for inventory and stuff like that. That’s certainly something we can do in the future. We can only create a balance that we believe makes sense.

Q: You can’t please everyone of course. If you make Mass Effect a more accessible cover based shooter, the hardcore RPG fans start moaning. But then if you hadn’t done that, others would moan about something else. Does it do your head in trying to cope with everyone’s demands?

CH: What it means is we have to really think about how we interpret feedback. Quite often feedback that appears to be conflicted is, if you think about it, quite often both sides are right, and there’s a way to resolve those things in a way that both sides can be right. So in terms of the inventory issue, for example, I don’t think anyone’s arguing that the changes to the interface and whatnot were not good. It comes down to kind of a separate thing which is, it’s always good to have a better interface that’s easier and more intuitive and whatnot. But a separate question is how much depth is in there once you do that. We had a lot of depth there, but there’s more that we can do.

Q: You mentioned the mining mini-game. I found that strangely therapeutic, almost addictive, despite how long it took.

CH: The feedback we had prior to releasing the game was generally exactly that. It was like, ‘It’s strangely addictive. It’s kind of therapeutic’. But there were different personality types, too. And one of the personality types that we hadn’t encountered was there were a lot of people that when they know that they can go and get resources through something like that, they literally want to mine the entire galaxy that night. And then, yeah, when you spend eight hours in a mini-game, it does become… there’s only so much too it. And we never expected that it’d be played that way. We thought people would noodle in it a bit, get a few resources to get an upgrade, and then go back and do the rest of the game.

Q: Are you ditching it completely for the third game?

CH: No. Again, when you look at the feedback, there are things that people liked about it, and functionally it serves a purpose. I don’t think there’s a problem with any of those. I think it’s the way people relied on it, and the way we relied on it maybe too much in parts of the story. And also just when you think about the speed of it.

Q: I remember when I got the upgrade that made the scanning reticule faster, it felt like the greatest upgrade I’d ever got in a game, because it cut so much time out of the process. Another observation I had was that I didn’t identify with a singular evil bad guy. There was the leader of the Collectors, but I didn’t identify with him in the same way I identified with Saren from the first game. I also felt like the end boss came out of nowhere. Is that feedback you’ve found elsewhere? Are you taking that on board?

CH: We were happy with the way it came together. Structurally it was a different kind of story. There are good things about the way that structure worked. It was kind of tied in with the fact that we had a suicide mission story, and that allowed us to make the character stories part of the main plot. Even if their loyalty mission is something that’s not combat-oriented or whatever, it could be something that affects the way the whole mission goes in the end. The fact that there’s all mystery around that end mission is really a cornerstone for the whole structure of the story. But it also means that when you reveal the mystery, there’s always a risk in holding a mystery until the end and then revealing it. For a lot of people they love the ending. It just comes down to different types of players and personality types. One of the reasons why we made an ensemble cast of characters is because we know everybody identifies with different people. We don’t even know who the most popular characters are. But even more importantly, for every different kind of person, there are different kinds of people in the game that you identify with, and they become your best pal in the game.

CH: For me it was one that a lot of people say they didn’t like, which is Jack. And for a reason that is opposite from what a lot of people say about her. A lot of people want to think the worst and they’ll say, ‘Oh she’s a marketing gimmick’. For me she is totally the opposite. I think she was one of the most authentic characters. I know people liked her. She has her guard up, and the reason she has her guard up is because on the inside she is afraid. If you ever get to that soft inside, she’s revealed something sensitive to you that you don’t want to hurt. It’s an interesting dynamic that I think comes across in a really authentic way if you’re open to that being a real character.

CH: But there are people who are totally in love with Miranda. She was a simpler character I think, but a lot of people really responded to her. I’m always amazed at the way people respond to different characters. One of the most reproduced moments in fan art that I’ve seen is characters female Shepard with Garrus in the end of their romance. It’s not even a love scene. They kind of hug and put their heads together. Obviously for a lot of people that meant a lot to them because there are hundreds and hundreds of paintings out there that people have done of that moment that they’re sharing.

Q: Looking to the future, you have new downloadable content coming out soon. For how long will you release DLC for Mass Effect 2? How long before it stops and attention turns to Mass Effect 3? Or will you support Mass Effect 2 right up to the launch of Mass Effect 3?

CH: It’s hard to say. We have a bunch of packs that are in the works right now. So, for the time being there’s going to be a continued stream of DLC for people. We’ll start to have packs that’ll tell the story between Mass Effect 2 and 3. But beyond that we kind of have to see how people are responding to what we have and go from there.

Q: Do you know when you’ll be ready to talk about Mass Effect 3? Is it far off, or are we looking at a similar time frame between 2 and 3 as there was between 1 and 2?

CH: It probably won’t be for quite a few months that we talk about Mass Effect 3.

Mass Effect 2 Overlord downloadable content is due out soon.