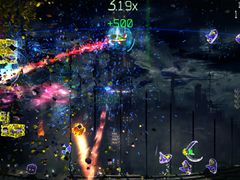 The planet Avernus is the developer’s homage to Greek mythology in which Avernus was the gate to The Underworld. The planet is dark and full of new enemies to shoot. Gameplay here is focussed on two new modes.

Players descend onto Avernus – featuring an all new day and night cycle – with the purpose of taking the fight to Sentients and destroying everything that moves. This won’t be an easy task with just a single life at your disposal.

Players do, however, have access to an improved shield, turbo speed, overcharged weapons and more.

As the mode is designed to keep players coming back to beat their high score, a couple of new additions have also been implemented.

This night time only mode arms players with a proximity bomb weapon which recharges after each use. That’s it, no other weapons, boosts or overdrive. Well, you also get the Wrecking Ball, which when caught up in a proximity mine explosion will fly off destroying everything it hits.

The Wrecking Ball powers up after destroying 1,000 enemies, and multiple balls can be obtained through power-ups.

And if these two new modes weren’t enough, the DLC features more trophies to earn.