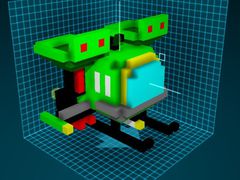 Out now, the free game update sets the groundwork for Wednesday’s Heroes Expansion, but adds many new features in its own right.

Ship editor: Players now have the ability to design their own ship from the ground up using a voxel editor. These creations can be shared with friends and the game’s community.

Local co-op: Play with a friend on the same system, sitting on the same couch (if you want).

More trophies: New trophies are to be included in the upcoming Heroes expansion, plus there’s a few extra as part of the free update.

Developer Housemarque has also made the difficult decision to reset the game’s leaderboards to combat the many exploits players have discovered.

However, those with high scores will be remembered in the Hall of Fame Leaderboards, which will display all scores from the Main Hero difficulty.