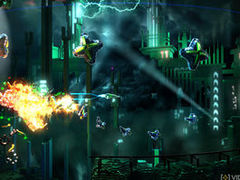 Resogun rated for PS3 by European classifications board

A PlayStation 3 version of PS4 shoot ’em up Resogun has been rated by European classifications board PEGI.

It follows one day after PEGI rated the previously-announced PS Vita version, and suggests that a release could also be on the cards for Sony’s last-gen console.

Neither Sony or Housemarque have yet announced a PS3 version of Resogun. The game first launched on PS4 last November.